Explore Freedom » Hornberger's Blog » Are You Attending the RPI Conference This Saturday?
EMAIL

The Ron Paul Institute is holding its annual conference at the Westin Washington Dulles Airport this Saturday, September 3. It stands to be another outstanding one. I have the honor and pleasure of again speaking at it. I will also be speaking at the conference’s program for young scholars the day before.

The theme of this year’s conference is “Anatomy of a Police State.” As the conference’s web page states, “Authoritarianism on the march. The police state advances. In near-darkness we find the greatest opportunity to make the case for liberty!” 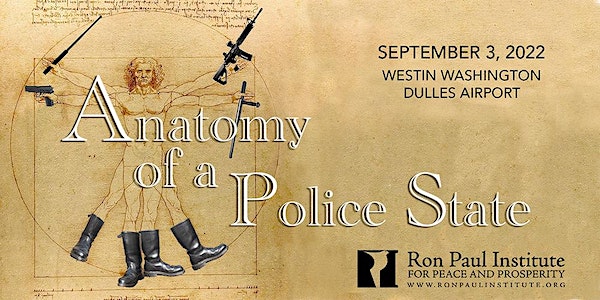 The conference will feature several speakers with whom FFF readers are familiar. John Whitehead, president of the Rutherford Institute, is one of them. Practically very week, we feature John’s article in our FFF Daily. Chris Coyne is professor of economics at George Mason University, which has the best overall free-market, Austrian-oriented economics program in the country. Chris has a new book coming out this year entitled,  In Search of Monsters to Destroy: The Folly of American Empire and the Paths to Peace. Jeff Deist, president of the Mises Institute will be talking about inflation. Plus Dan McAdams, Gary Heavin, Cheryl Chumley, Doug Macgregor, and, of course, Ron Paul, who is a real-life hero for me.

Every day, I see countless commentators in the mainstream press focusing on Russia, China, Iran, North Korea, Cuba, Venezuela, and other authoritarian, totalitarian, or communist regimes. (I often wonder why they don’t spend any time on Vietnam.)

How much time do I spend focusing on the tyranny of foreign regimes? About 2 percent of my time.

After all, I want to be free. I want to live in a free society. Given that that is one of my principal goals in life, why should I spend my time focusing on the lack of freedom in Russia, China, North Korea, and elsewhere? How does that bring me closer to a free society here at home?

The mainstream media, of course, feed into this mindset by devoting 98 percent of their time to foreign regimes, such as Russia and China, and 2 percent (or less) of their time on the tyranny here at home. That’s because (1) they have a blind spot when it comes to U.S.-imposed tyranny; (2) many of them consider themselves to be loyal and patriotic assets of the U.S. national-security establishment; and (3) they are scared to death to expose and criticize U.S. governmental wrongdoing for fear that U.S. officials will do to them what they have done to Julian Assange and Edward Snowden.

The Ron Paul Institute gets all this. That’s why the focus of its conference is not on the police states in Russia, China, and North Korea but rather on the police state under which we Americans suffer here at home — and on what we need to do to rid our nation of their terrible scourge and restore liberty to our land.

I hope you can attend this important conference. Not only will you watch some great talks, you will also have the opportunity to hang out with people who are as concerned about the plight of our country as you are and who are as committed as you are to getting it back on the right track. You can register here. If you do make it, please come up and say hello.